So many good projects, only so many people and just so much money…Thank heavens summer is coming in … at least there’s a chance I might have time to stop and think or just catch up with myself.  And I want to think about this challenge of productive human resource deployment for innovation projects that deliver desired outcomes.

Maybe robots are our future workforce – they don’t require human resource management, they never tire, they never need breaks during the day or annual leave or healthcare benefits, pleasant work surroundings or any number of things humans need to survive and thrive.  The only on-boarding they need is installation and a computer program to follow. And, you can turn them off – you don’t have to fire them. However, I don’t know yet of a robot designed to work concurrently on two or more tasks. They are, as yet, focused and linear in approach. Humans alone have complex, non-linear thinking ability and can work on more than one task at a time.  So far, humans still out-perform robots in creative problem solving and innovation.

So, why are we so dumb when it comes to using some of our most skilled human resources? Why, on the one hand, do we persist in requiring too many of our people, especially in R & D teams to do too much. And why, on the other hand, does executive leadership have so much difficulty killing projects. Those who expect their human resources to provide organic growth from innovation that delivers competitive new products should remind themselves of IBM research that was done in the late 1990’s about work efficiency as a function of the number of concurrent projects per engineer.  Findings from this study are presented on page 306 in the book by Dariush Rafinejad, Ph.D., Innovation, Product Development and Commercialization: Case Studies and Key Practices for Market Leadership, Plantation, Florida: J. Ross Publishing, 2007. Print. 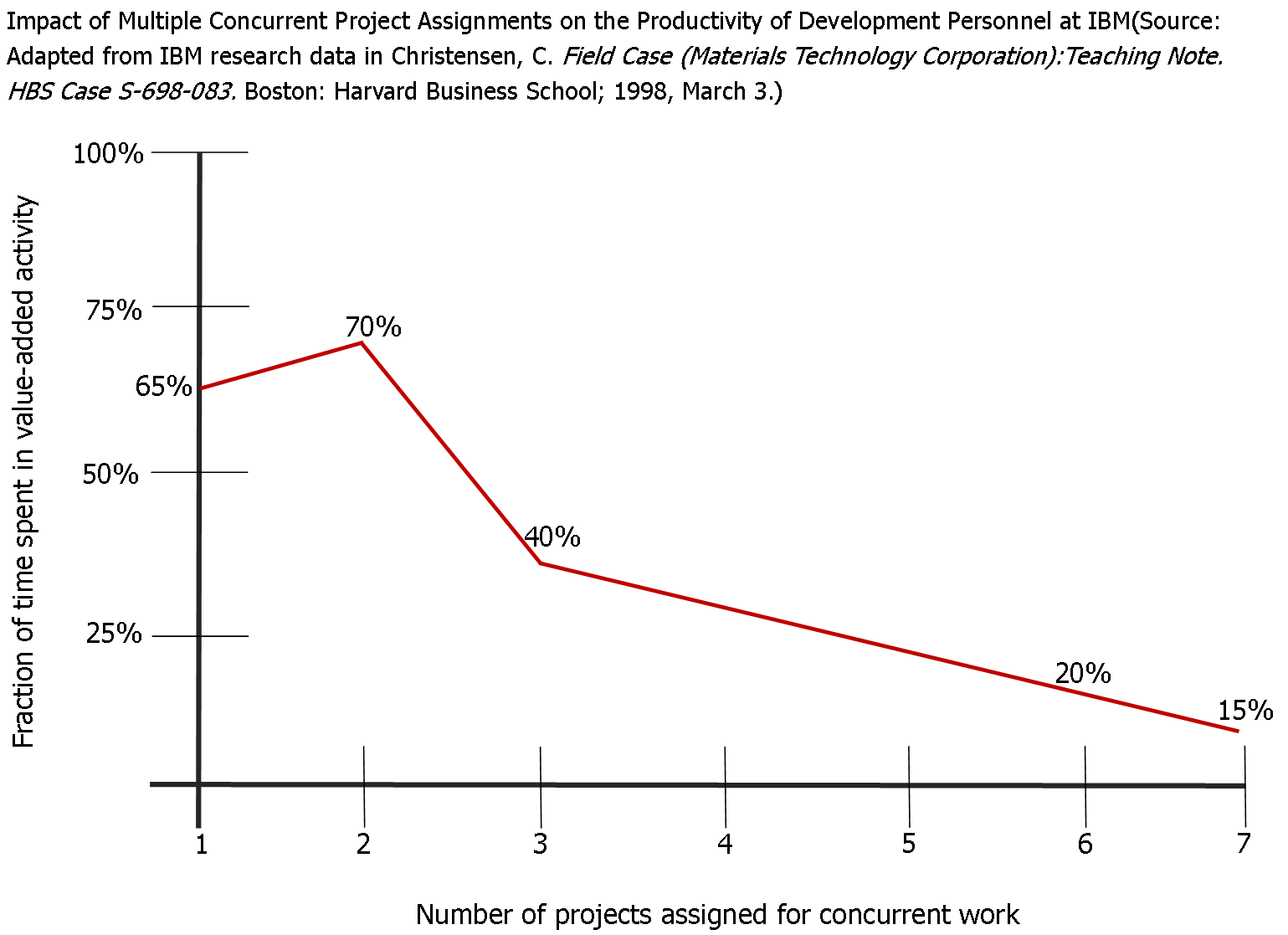 The following text (p.306) from Rafinejad’s book describes the research and the insights presented in the graph.

As described by Christensen “IBM asked over a thousand engineers to keep track over the course of one month of how they spent their time.  At the end of each day they were asked to record the time they had spent in one of two buckets: value-added and non-value-added time. Value-added time consisted of time spent in productive individual engineering work and in meeting in which productive decisions were made and adhered to.  Non-value–added time consisted of having to rework things that were done incorrectly or to rework things in which new requirements were imposed by subsequent decisions.  Time spent in meetings revisiting decisions that previously had been made, or brining members up to speed who had missed earlier meetings, and time spent travelling to meetings were also classified as non-value-added time.  At the end of the month, IBM engineers were also asked how many projects they had been assigned to work on simultaneously during that month.”

Rafinejad goes on to explain:

[As shown in the graph above], a worker’s efficiency in carrying out a task is substantially reduced when that worker’s attention is divided among three or more projects.  Conversely, the worker is more efficient when working on two tasks rather than one.  The contributing factors to shaping the proficiency profile are setup time, wait time, and freshness of thought.  Working on two projects is more efficient than working on one project because the wait time for input from one project is spent on working on the second project.  Furthermore, the boredom that is associated with working on the same task for too long is minimized.  Yet, when a person works on three or more projects concurrently, he/she must spend some amount of nonproductive time in gracefully closing an active task and restarting the next.  Restart time is usually spent on preparing tools, rearranging the work area, accessing the right information, and coming up to speed about where work on the task left off.  The total setup time to stop and restart multiple tasks becomes excessive and overall efficiency drops.

Another important factor, often ignored in planning resource requirements, is recognizing that 100% of each person’s time is not spent on assigned projects.  Employees spend time in attending staff meetings and performing other administrative duties.  Allowing 10% for such overhead activities is a reasonable practice.

I am certainly not alone in thinking about this continuing conundrum.  It seems particularly pertinent in the economic life of America today because of the accumulated stress of the recession on our smartest workers.  These folks have typically been asked to do too much for too long. Executives, project managers and human resource professionals need to ensure the future of their companies by courageously linking strategic focus with informed human resource deployment in the pursuit of organic growth. Do less – Win More!