My husband, Mike, is one of the most creative, and most productive, people I know. He is constantly creating things; woodworking projects, businesses, websites, beer, blogs and many other things. I am continually amazed at what he is able to produce. Not only is there now something where there once was nothing, but whatever it is, it’s usually interesting, funny, delicious or just cool. He has told me that the principle he remembers to help him be creative and productive is, “Just ship it!” The Lifehacker article pictured above discusses a similar sentiment. Also, one of Mike’s personal entrepreneurial idols, Seth Godin, had this to say about the subject.

In short, don’t be a perfectionist. When you create something out of nothing, there are always going to be a million ways to edit or tweak something. The important thing is that you put your pen to the paper and put something out there that can be critiqued or built upon. Too many times, we are paralyzed by the things we don’t know or can’t do, instead of focusing on what we do know and what we can accomplish. Sometimes the hardest part is just taking the first step. From what I have learned from Mike, the courage to be creative and take that first step comes from giving yourself permission to do 2 things:

1. Explore in areas where you are not an expert. 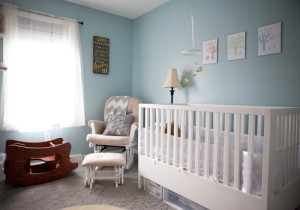 Many of Mike’s forays into creativity are in areas where he has no prior knowledge or experience. When we found out we were expecting our first child, he told me that he wanted to build the crib. I initially thought there was no way that I was going to let this amateur build what my baby slept in every night! But we agreed that if it didn’t meet my standards, we could buy one. With a little research, he made his own design. There were several hiccups along the way, but he ended up making a custom, beautiful, heirloom piece that we will cherish forever. On top of that, he wrote a witty How-To Manual with pictures and drawings, and made a website to sell it on. Since he finished, he has made many friends in many countries, where people bought and used his plans to make heirloom cribs of their own!

He sometimes fails. A few years ago, he quit his job to pursue a startup business with a friend. Long story short, roughly one and a half years later, he sold his 40% share of the business for $1 and moved on. It was a humbling learning experience, which taught him many things. But, a few months later, he sold an idea for a business extension to his current employer and continues to be their resident intra-preneur. When you are living by “just ship it”, you don’t let failure, no matter how big, keep you from getting up and creating again.

My encouragement to all you readers is to be a creator. Make something out of nothing. Let others critique it, build on it, or make it their own. You will be amazed at what you can do when you just give yourself permission to explore in areas where you are not an expert and also to fail. Because, you will never create anything great if you don’t at some point “just ship it!”