Product and process invention, innovation, and step-change improvement are essential to survival. 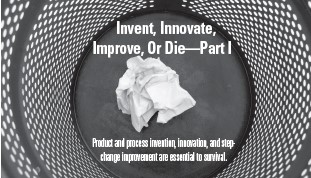 Growth by other than acquisition requires a business to invent, innovate, or radically improve its processes or products and services. Even acquired businesses must invent, innovate, or improve to survive and thrive. According to a March 2005 Business Week article by Diane Brady entitled “The Immelt Revolution,” even GE, a $152 billion finance and industrial giant which is the world’s largest bank—yes, that’s right, bank—and the business community’s benchmark for cost-oriented management, gets it.

In the 1990s under the watchful command of Jack Welch, the much lauded captain of industry and finance, GE grew incredibly through deal dependent acquisitions and financially managed currency transactions. The company’s rocket-like growth was fueled by a low cost of capital (remember the part about being the world’s largest bank?). Profits were dropped to the bottom line by relentless improvement (a GE euphemism for cost-cutting) or “milking” (i.e., taking profits without reinvesting) longstanding, unglamorous operations such as the appliance business. While overall growth was staggering, moving GE into the position of the world’s largest non retailing corporation, organic growth in existing businesses was a tepid 5 percent. And incredibly, despite a mandate from Welch that GE businesses had to be #1 or #2 in their markets, the company spent comparatively little on marketing, and even less on innovation. This last fact is amazing, especially when you consider that GE is the legacy of Thomas Edison, one of history’s most prolific innovators and a holder of more than 1,000 patents.

Following Welch’s lead, America’s “innovation” leaders, cowed by a new generation of over-eager market analysts who didn’t know what they didn’t know, followed GE’s lead blindly like lemmings to the shallow sea of short-term profit. Between 1990 and 2004, delivery of fundamental innovation from innovation projects was reduced nearly 50 percent from 20.4 percent to 11.5 percent (PDMA, CPAS Research, 2004). And remember the appliance business that GE milked? Whirlpool took the opposite approach and invested, launching its highly successful, highly expensive, efficient, effective, and profitable line of Nautilus washers and dryers in a market GE had all but written off, possibly because they were not investing in marketing research.

Fast forward to 2005. GE’s CEO Jeffrey Immelt, Welch’s hand-picked heir, has come to realize—with the help of a slower-growing economy and reduced tolerance among wizened investors for companies that buy their way to growth—that you can’t save your way to prosperity forever. At some point a company has to innovate, invent, or make fundamental improvements in the way it works or goes to market—improvements that go way beyond cost-cutting. According to Brady, “… like many of his peers, [Immelt] has been forced to shift emphasis from deals and cost cutting to new products, services, and markets.” From Brady’s description of GE, it seems they are being coerced into performing the unnatural act of pursuing things new, unique, and different. Apparently invention and innovation are not second nature to GE, although they once were to Edison.

Immelt has called upon his company of Six-Sigma-driven axe men to become free-thinking innovators and inventors of big ideas that will create $100 million businesses. Now, writes Brady, according to Immelt, “At GE the new imperatives are risk taking, sophisticated marketing, and above all, innovation.” The new bottom line? Immelt “wants to transform the hard-driving, process oriented company into one steeped in creativity and wired for growth.” Compared with the previous Welch mandate of being #1 or #2 in their businesses, today managers are faced with a new and more unnerving threat from Immelt: “You’re not going to stick around this place and not take bets.”

Apart from strong talk, what is Jeff Immelt doing to execute on the new growth imperatives? Much as Welch demanded bottom line improvements by turning the company on its head and shaking until he got them, Immelt is “turning GE’s culture upside down, demanding far more risk and innovation.” But at the same time, Immelt has two fears: 1) that GE will become boring; and 2) that his top managers will act like cowards. According to Brady, “he worries that GE’s focus on bottom-line results—and tendency to get rid of execs who don’t meet them—will make them shy away from taking risks that could revolutionize the company.” So, now, after more than two decades of managing by the numbers and with the assurance many of the corporate properties worth buying have been bought, “business leaders are being asked to develop real prowess in creativity, strategy, and customer service that are hard to measure.”

And Immelt is doing something else that is new for GE: in a company where good managers were used to moving on to bigger and better things after two years, he’s sentencing managers to serve their businesses for many years—so that there’s no hope of parole—even for good behavior. Just as implementing Six Sigma took all the perseverance Jack Welch could muster, according to Brady, “part of the culture change” to focus on new products requires “practice and persistence.” So now, to foster informed invention and innovation, GE is keeping people in industries and positions longer so that they can really get to know competitors and customers and their wants, needs, and likely responses. Imagine that.

Additionally, to make GE’s new and unfamiliar focus on things which do not yet exist seem more familiar and rooted in the here-and-now, Brady writes, “In true GE fashion, [Immelt] has engineered a quantifiable and scalable process for coming up with moneymaking ‘Eureka!’ moments. Business leaders must submit at least three ‘Imagination Breakthrough’ proposals each year that take GE into a new line of business, geographic area, or customer base—and each one has to give GE incremental growth of at least $100 million. GE is also “linking bonuses to new ideas, customer satisfaction, and sales growth, with less emphasis on bottom-line results.”

But guess what? Many of GE’s best and brightest, management gypsies with high GPAs trained at top shelf colleges and universities or at the company’s vaunted Croton-on-Hudson management school, are finding themselves outside their comfort zone, beyond their capabilities—and maybe even beyond their personal capacity. Staying put and inventing and innovating to create $1 million or $100 million businesses is not something everyone can do—no matter how highly ranked their B school happens to be. But here’s the good news: most of us are psychologically capable, and all of us are intellectually capable, of either inventing, innovating, improving, or playing an important supporting role on a team undertaking one of these activities. In fact, it’s a rare individual who can’t help invent, innovate, or improve something with which they are familiar.

Stay tuned for future articles exploring why GE has a problem that transcends quick-fix management training, as well as how to identify the kind of creatives you have—or need—in your business.